Ethernet-based LXI is changing the way engineers and scientists perform test and measurement and data acquisition. As more and more PCs ship without expansion slots, customers are faced with the problem of replacing their test and measurement and data acquisition equipment. Bustec believes in the power of distributed systems and the use of IEEE standards.

The ProDAQ 6100 LXI carrier is LXI Rev. 1.3 compliant and is available as either a Class A or Class B device. The ProDAQ 6100 is a logical extension of the company’s VXIbus product line, providing customers with the ability to use more than 40 Bustec function cards and signal conditioning modules previously released for use in VXI systems.

The ProDAQ 6100 carrier is a 1U-high, half-rack width module into which customers can integrate up to four ProDAQ function cards. It can be equipped with Bustec’s standard programmable voltage reference for on-the-fly calibration. The synchronization of multiple ProDAQ 6100 carriers using IEEE-1588 protocol is 20 nsec RMS. With the release of the ProDAQ 6100 LXI carrier, Bustec demonstrates its commitment to international and enduring standards. Bustec supports equipment for 20 years or longer, which is not achievable with PC-based standards. 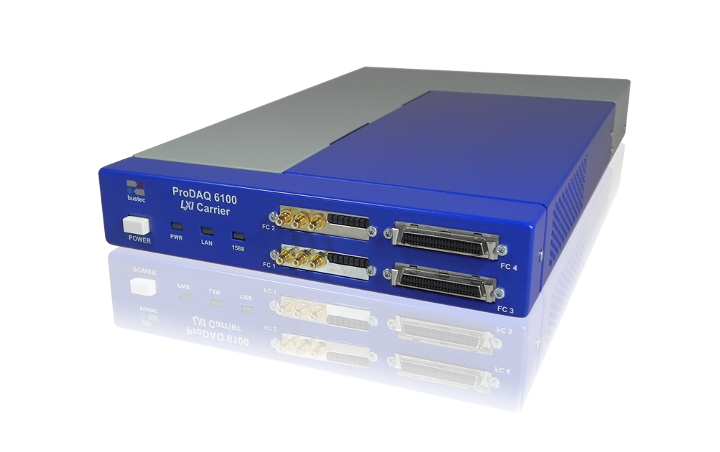 A function card carrier that provides access to up to four ProDAQ function cards through a standard Gigabit Ethernet interface.